Savara 2.0.0.M2 has just been released as an Eclipse update site version only. This is because all the work for this milestone has been in the core OSGi bundles and the Eclipse plugins, so no reason to build a new server integration distribution.

The main purpose of this milestone release is to perform some refactoring to enable extensibility in the contract/service generation areas, and the simulation of roles defined in a scenario. This has resulted in two main changes:

1) In previous releases the particular target generation format was selected on the context menu associated with the choreography description. From this milestone release, the generation menu now only provides two options, Contract and Service. These options launch a dialog window that enables the user to select the specific generation format for all relevant roles in the source model. So this means that all of the relevant contracts or services can be generated in one step, potentially using different target formats. Currently only BPEL and WSDL are supported.

2) New simplified Scenario format and associated editor. The new scenario format only contains the basic information required (equivalent to the business view in Savara1 scenarios) and is no longer tied to a particular (ws-cdl) model, which has its pros and cons. The pros are that it can be used against multiple models, which also means that each role can be simulated against a different model (or service implementation). The cons relate to the ease of specifying the scenario, as there is no direct reference model. However scenarios are intended to be specified before the model (in terms of the methodology when used top down), so in those situations a model wouldn't be available anyway. A future enhancement could be to enable artifacts to be associated with the scenario in a less explicit manner, which could be used by the editor to infer information that could be useful to the user in constructing the scenario.

Note that currently there are no docs for these changes. The aim is to make the features available as soon as possible, to encourage feedback - therefore a quick overview of the new scenario capability is described below.

The first change is that Savara scenarios (as opposed to the pi4soa Scenarios previously used) have their own category in the New menu. 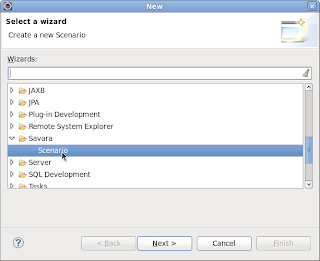 The scenario editor itself is very similar. From first appearence it only looks like a few of the palette items have disappeared. These are the 'Assert State' and 'Record State' items, which were very limited in their capability and specific to WS-CDL. A future enhancement of the new scenario format could investigate ways of specifying assertions. 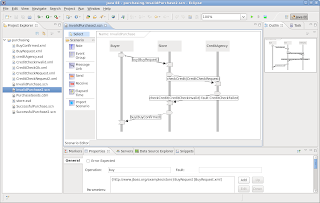 The main change to note here is the properties associated with the selected message link. With the new scenario format a message link now only identifies whether an error is expected, the optional operation and fault names, and one or more parameters. A parameter is comprised of two pieces of information, the parameter type and the URL to the message value.

The next change is the way in which scenarios are simulated. Previously when the simulation was triggered, it would immediately simulate the scenaro against the WS-CDL choreography description that had been directly referenced from within the scenario.

In this new version, performing the simulation action (i.e. pressing the green 'play' button or selecting scenario->simulate on the context menu), will show the following dialog window: 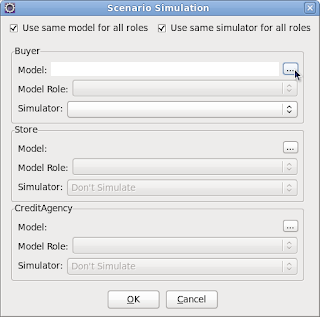 The main region of the dialog is composed of a repetitive group, one per role in the scenario. This group enables the (a) model (i.e. choreography), (b) role within the model, and (c) simulator, to be selected. There are also checkboxes at the top of the dialog (checked by default) that enable the same values for the model and simulator to be applied to all roles within the scenario - making it more efficient in the case where only a single model and simulator implementation is being used.

To load the model, simply press the '...' button by the first role's model text field. This will display a dialog box that can be used to find the appropriate model. The list of model roles, and simulators, will update once a model has been selected, to reflect the available roles and simulators that are appropriate to the model. So if you select any old file, then don't expect any values to appear in these comboboxes. Currently the only model type supported is the .cdm files.

In our example project we have a PurchaseGoods.cdm model. When this is selected, the dialog window makes its best estimate at the model role mappings: 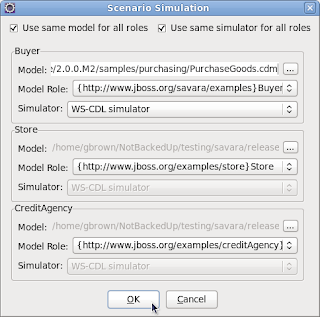 When the OK button is pressed, this will trigger the simulation, which will be reflected in the graphical representation of the scenario as before: 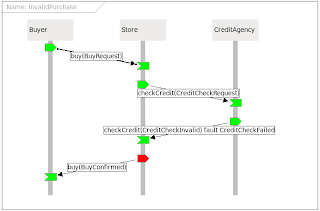 Feedback on these new changes, and any enhancements required, would be welcome. Simply post to the user forum or raise an issue in the Savara jira.


To install the release, simply download the JEE version of Eclipse Helios, and then install the following using the "Help->Install New Software" menu option:

and if you wish to generate and/or view BPEL processes, then

The example project used above can be found here: http://downloads.jboss.org/savara/releases/2.0.0.M2/samples.zip